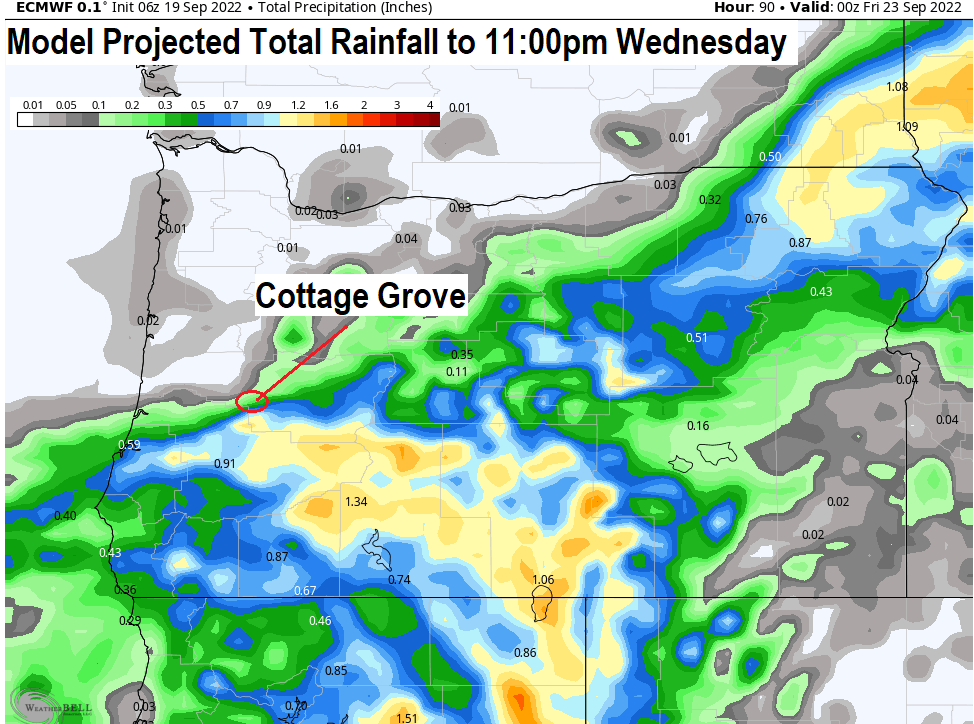 Monday Weather Update: Other than some sprinkles, no rain fell in Cottage Grove over the weekend. However, rain did fall over the Cascades. Scroll down and check out the map of rain totals - about 1/2" of rainfall was observed near the Cedar Creek Fire (east of Oakridge). While not nearly enough to put out the fire, it does help.

That "cut-off" low pressure system we talked about on Saturday is still sort of stationary currently (about 150 miles southwest of Eureka, CA) and spinning bands of moisture into California and mainly southern Oregon.

WINDS + Smoke + Air Quality: Winds over the next several days will likely change direction and times which could blow additional smoke into our area. A large amount of smoke is not expected (winds won't be strong enough), but air quality will likely bounce around and venture into the "moderate" or possibly "unhealthy for sensitive groups" categories. Air quality in Cottage Grove has generally been "moderate" over the past 24-hours.

Today (Monday) a chance of showers. No strong wind concerns.

Tuesday-Wednesday: The aforementioned low pressure system will finally start moving northeast into Oregon and weaken. This will allow for rain/shower chances here. Looks like we'll be on the northern edge of where the moisture will be from this system. It's not a slam dunk that we'll get more than a few light showers, but the possibility exists for up to 1/3" of total rainfall depending on exactly how far north into our area the moisture pushes. Can't rule out a rumble of thunder. No strong wind concerns.

Thursday-Sunday: The system moves east and out of our area with dry weather expected Friday into early next week. Winds Friday through the weekend are expected to blow from the west, which would push any smoke away from us.

Next Week: An unsettled pattern may kick in across the PacNW. More details about this on Wednesday.