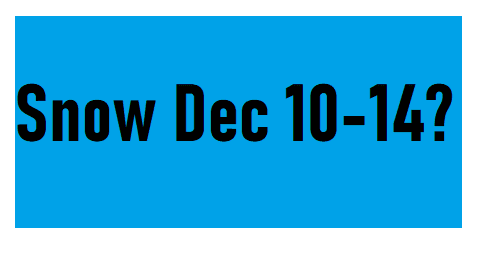 Where we stand with precipitation: November's going to close out with below average rainfall. Normal for the month is 6.92" and we've recorded 5.25" here in Cottage Grove. However, we had 4.55" of rainfall in October (start of the water year) when the normal is 3.67". Therefore for the Year-To-Date, we're really only behind 0.79" which is not bad at all (about another 1/5" (0.20") is expected on Monday). Storm systems with tons of moisture have been slamming into British Columbia, which has seen incredible amounts of rain and massive flooding. Undoubtedly, La Nina is having an influence on the weather patterns.

The week ahead: Monday, a low pressure system will clip our area and allow for light rain chances. Expect no more than 1/5" with light winds. Monday night through Friday (Dec 3) looks to be mainly dry with just a small chance of a light shower or two on Thursday. Low temperatures are expected to remain above freezing with no threats of frost through Sunday Dec 5 (scroll down for 10-day temperatures).

Wet and Cold? A major pattern change is looking more and more probable starting around December 4. A series of cold low pressure systems may begin to pass through the PacNW and into California (where precipitation is desperately needed). These systems are not only expected to be cold, but become progressively colder. Snow levels will likely start off at around 3000-4000' on Sat Dec 4 and could possibly be down to 1000-1500' by December 8th. Maybe lower, we'll see. Total combined rainfall through Dec 14 could be 3-5" with 2-4 FEET of new snow in the Cascades (if this all comes together as modeled). Some data is hinting that we could see some light snow here in Cottage Grove Dec 10-14.

System#2 Mon Dec 6: expected to be strong with lots of moisture and may be windy (snow levels might drop to 2000'):

IF high pressure doesn't break down as currently expected, then some of these low pressure systems may continue to be pushed well north of our region. Based on what I see right now, I do think the storm door will open for us. It should be noted, however, that computer model data are not in harmony and details will be sorted out over the next few days. I'll have an update out on Tuesday or Wednesday the latest.

Temperatures are expected to start trending cooler than average (normal) beginning around Dec 4:

Temperatures look to be "around" this over the next 10-days:

SNOW is possible! Models are starting to suggest lowland snow around Dec 10-14: