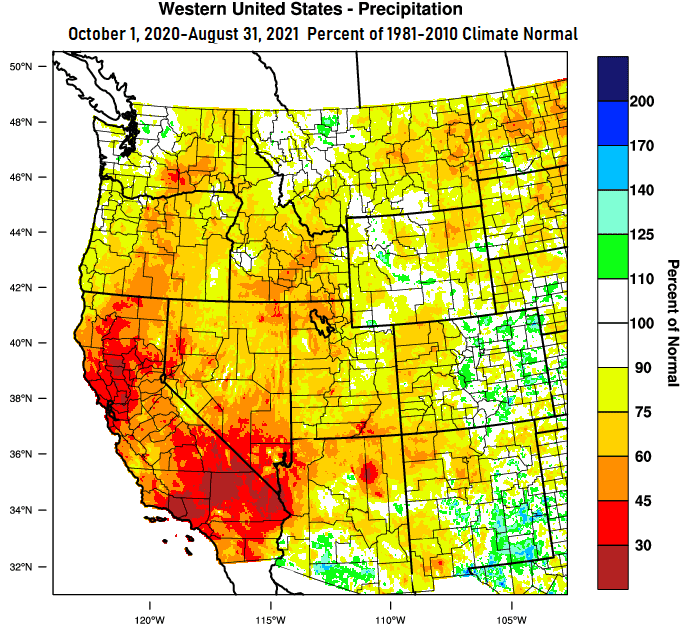 We're just now starting to enter our rainy season, so expect drought conditions to gradually improve as time moves forward. The 1.25" of rainfall we had a week ago (Mon/Tue Sept 18,19) wasn't enough to make a difference on the Drought Monitor. But, again, we'll see drought conditions improve throughout the next several months. How much improvement will, of course, depend on the amounts of precipitation received.

Let me first say that September/October 2020 only saw 1.74" and 1.88" of rainfall, respectively. The monthly "normal" is 1.39" and 3.50", respectively. This year, September had 2.97" of rain, which is 214% of normal! Note that a wet September doesn't correlate to the rainy season ahead following similar suit. I'm cautiously optimistic, that, with what I'm currently seeing amongst the data signals, our storm door may remain wide open throughout October. In fact, there's some preliminary indications that we may kick into high gear around the middle of the month. A weak La Nina is looking more and more likely. Historically, "weak" La Ninas are split at nearly a 50/50 chance of below normal or above normal precipitation across western Oregon. In other words, the precipitation pendulum could swing one way or the other when weak La Nina conditions are present across the Equatorial Pacific. The below images are the modeled probabilities of a La Nina and the predicted "weak" strength (-0.5 to -1.0).

NEXT CHANCES OF RAIN, COOLER TEMPS

Tuesday looks to be our next shot at rainfall with showers possibly lingering into Wednesday (preliminary rainfall total of ~1/3"). Thereafter, and as it looks as of this writing, low pressure systems may regularly pass through about every other day or so (beginning next Friday Oct 8 -- key word is "may"). Some of the systems could be cold enough for snow to reach down to pass levels. A much less likely scenario is for high pressure to build in over the North Pacific and push the jet stream to the north of our area. Bottom line is that most signs point to healthy precipitation events throughout October. This gives greater confidence that near normal rainfall (3.50") may occur throughout the first month of the new water year. Here's a "blend" of what the various modeled temperatures look like over the next 10-days:

Next update will be on Sunday or Monday