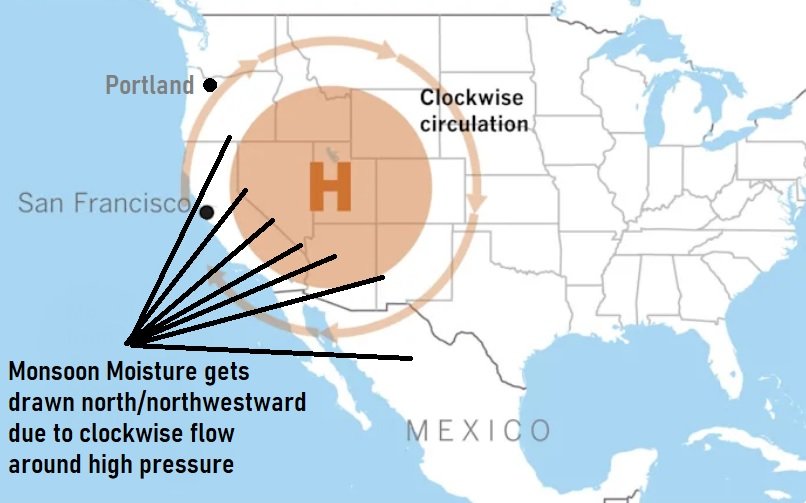 I'll talk about relatively cooler temperatures and possible rain here in a bit. But first, let's discuss thunderstorm possibilities today (Friday). We're on the western periphery of strong high pressure that's just to our east. Since the circulation around high pressure is clockwise, this is drawing up warmer air and monsoon moisture from the south into our region. The result has been hotter than normal temperatures, increased humidity, varying amounts of clouds, and some thunderstorms from about the crest of the Cascades eastward. Today (Friday) and tonight appear to have the best chances for a light shower or thunderstorm over our area as the "flow" turns more southerly. Thunderstorm chances will continue into Saturday and Sunday, but current thinking is that there's much less chance across the lowlands with the focus back into the mountains (especially Sunday). All in all, don't be surprised if you hear some thunder or feel some rain drops.

HEATWAVE: Although this is our warmest time of the year, high temperatures have been running above normal since about June 20 (with the exception of a few days). Highs today (Friday) have the potential to reach 95-100, but this could be offset by how much clouds pass through. Either way, it will still feel "muggy" and hot. We'll see gradual cooling over the weekend. In fact, as we enter August on Sunday, highs will be right around our normal of 86 with less humidity. Monday through Wednesday, highs look to be around 85-90. Due to some possible cloud cover during the night, low temperatures will vary between the upper 50's and mid 60's. Lows will start bottoming out closer to our normal of 53 as early as Sunday night.

RAIN + PATTERN CHANGE? The computer models have been pretty consistent for a few days that something is in the works for later next week and the following weekend. It's looking more and more likely that a storm system will impact the region as early as Thursday or Friday of next week but may hold off until the following weekend. Even though there's quite a bit of uncertainty right now with the timing of this system (Thurs-Fri vs Sat-Sun), I have more confidence that a cooler and possibly wetter pattern may evolve. Look for an update about this on Monday.

DROUGHT To no surprise, drought severity continues to increase with each weekly update of the Drought Monitor. Here's the latest:

FIRES: As of this writing (Friday morning), no new major fires have developed around our local area. The Jack Fire, east of Roseburg, is 61% contained and has burned a little over 22,000 acres. The major and massive Bootleg Fire, northeast of Klamath Falls, has burned over 413,000 acres and is 53% contained. Those are the two largest fires burning in Western and Central Oregon. So far, smoke from the Jack Fire (closest to us) has generally stayed out of the Cottage Grove area.