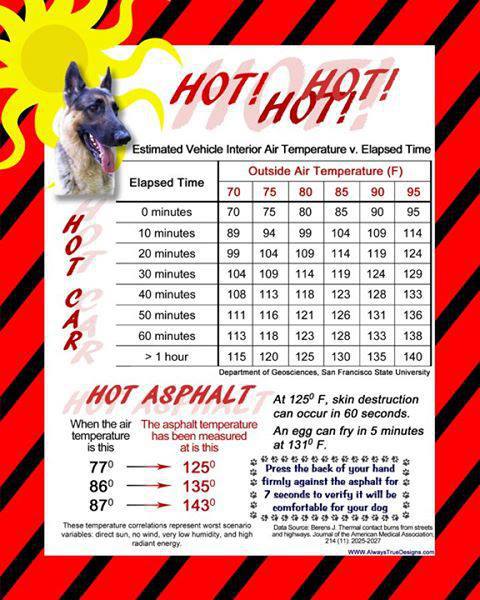 Because of high pressure building into the region, winds have shifted and are blowing smoke into our area from the fires to the east. This is causing areas of smoke and hazy skies with an orange tint to the sun. Haze/smoke may have an impact on forecast high temperatures and could cause such to be 1-3 degrees lower than previously forecast (due to "filtered" sunlight). Make no mistake though, it will be downright hot with afternoon highs topping out at 97-103. Overnight lows will be warmer than normal, only bottoming out at around 60 through the mid 60's. Warm temperatures during the evenings and early nights will offer little relief from the heat. Therefore, the National Weather Service issued an "Excessive Heat Warning" for the region trough Saturday to address this. The fire danger is EXTREME in Lane and Douglas counties.

The Humane Society of Cottage Grove asks to keep in mind that animals need plenty of access to shade and fresh cool water. The Humane Society recommends dog walking be done in the mornings before the pavement gets hot or during the late evenings just before sunset (or forego walking altogether). During the late morning through early evening, sidewalks and asphalt temperatures can easily reach above 140 degrees. This can burn paws in seconds! Animals should never be left in vehicles - see the fact sheet for how quickly a car's interior heats up (even with the windows cracked).

How long will this heat last?

It looks like we'll start to gradually cool down over the weekend. Highs are expected to cool to around the middle 90's on Saturday, then near 90 on Sunday. Additional cooling will then occur next week, and with fingers crossed, we may see a few 70's. The pattern becomes a little complex over the weekend, but I do think a low pressure system will pass through Vancouver Island (BC) on Sunday with a couple of more early next week. This will weaken our high pressure and eventually kick it out of our area. There's still some uncertainty as to how strong these low pressure systems will be, which will have an effect on how much cooling occurs. Either way, cooling will be felt next week. It's just a question right now of "will we cool into the 80's or see some 70's." Check out some of the model predictions below. As you'll see, there's some pretty big differences amongst them (but all agree on cooler temps next week). Remember, these are just models and accuracy starts to drop after 3-5 days. No rain in sight (as it looks right now) but a cooler pattern next week looks more certain.