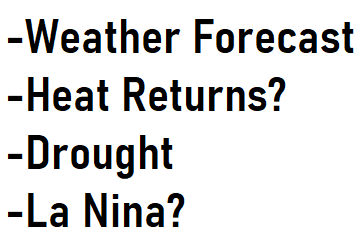 Ah yes, we can finally take a breath fresh (and cooler) air! Since Memorial Day, high temperatures have ran above the seasonal average in excess of about 70% of the time. We've had 8 days that reached over 100 degrees, 24 days in the 90's, and 9 days at 88-89. Normal high/low temperature right now are 84/51, respectively.

Days are getting shorter, nights are longer (sunrise is now 6:23am and sunset is 8:08pm). The sun is becoming less direct and more angled. The Meteorological Fall begins on September 1 and the Autumnal Equinox occurs on Sept 22. The polar jet stream is responding accordingly, dipping a bit more south at times. This has resulted in several weak (and mainly dry) low pressure systems passing closer to, or at times through, our area.

Today/tonight (Friday), another weak and mainly dry low pressure system will pass through the region. For us this just means mainly cloudy skies (with some breaks in the clouds possible at times) and a few light breezes. Regarding rain, most of the energy stays north of us but I can't 100% rule out some sprinkles or a brief light shower overnight. High temps today will be around 70-75 (depending on how many peeks of sun) with lows 48-52.

Saturday, clouds should decrease during the late morning or afternoon. If clouds clear in time for a good amount of sun to peek through, highs could top out at 75-80. Lows are expected to be 45-50. Breezes should stay at around 10 mph or less.

Monday through Wednesday is not looking as hot as some of the models previously predicted. We're now looking at mainly clear skies with highs 81-86, lows 45-50.

Later next week and through the end of the month, several low pressure systems are expected to pass through southern Canada and northern Washington. This will prevent any high pressure from becoming strong over our area, which means temperatures are more likely to stay at or below normal. At this time, rain is not expected here. However, this is the end of the month pattern change that I've been talking about for a week or so. Keep your fingers crossed because if this pattern generally unfolds as expected, it'll keep smoke mostly out of our area (unless winds temporarily shift) and bring a little more relief to the firefighting efforts.

Below are some of the model predictions (scroll down for drought & La Nina) Note that models become a little squirrely this time of year and can sometimes throw out some off the wall predictions.

Another La Nina? Not so fast!

Up until yesterday, the computer models were strongly signaling another La Nina developing this fall. Back-to-back La Nina's are not uncommon, and there's even a meteorological term: La Nina Double Dip. However, as you'll see below, the models are now starting to hint that maybe "neutral" conditions may instead persist through Spring 2022. Neutral means neither a La Nina or El Nino is present. We'll talk more on this in the coming weeks, since models typically undergo a "seasonal adjustment" this time of year due to the global weather patterns starting to change into a more fall-like pattern.