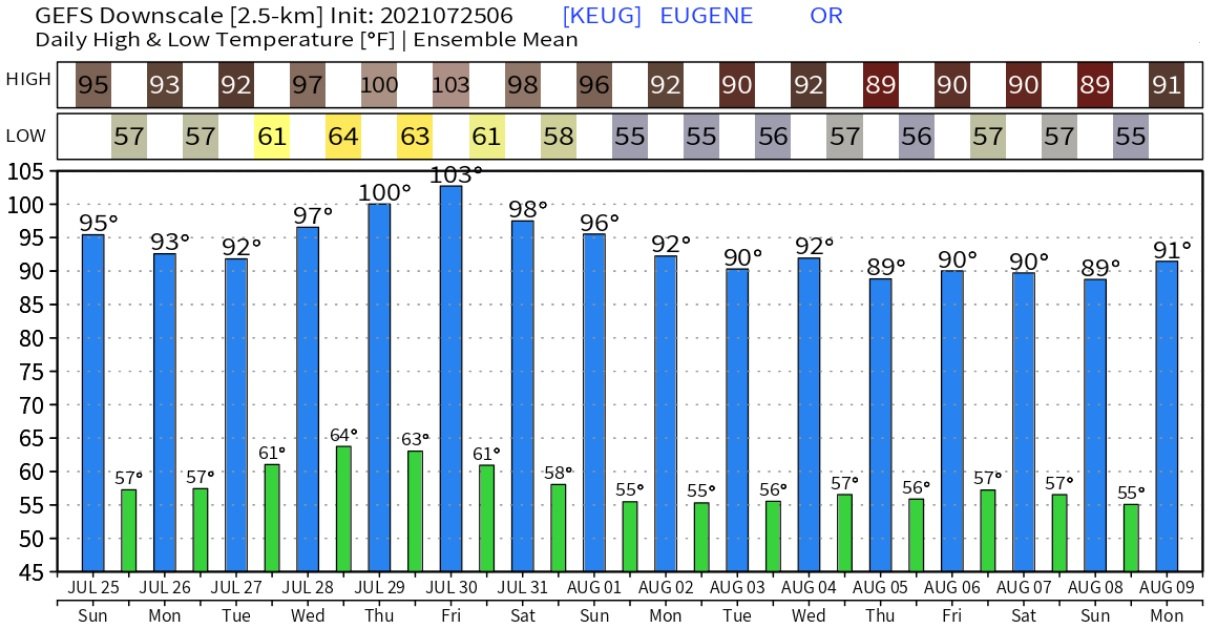 We're now in the warmest part of year, with our normal high temperature at around 86 degrees (normal low is near 52). Temperatures are expected to be hot this week and into next weekend, with highs mostly around 90 to 97. Some data this morning hints that high temperatures on Thursday and Friday may be 96-101, which will most likely be the hottest of the next 10-days. But there's a fly in the ointment: monsoon moisture.

The desert southwest monsoon remains very active and a northward push of moisture throughout California and into southern Oregon is expected through the middle or end of the week. For us, this will cause varying amounts of clouds at times with extremely small chances of sprinkles, a light shower, or even a rumble of thunder. Since we'll be on the northern periphery of this moisture surge, highest thunderstorm chances will remain to our south and also over the higher elevations of the Cascades. It should be noted that when dealing with monsoon moisture, forecast accuracy decreases. For example, previous day's thunderstorm activity can have a large effect on the next day by creating mini disturbances, or triggers, for additional thunderstorm development (even at night). Concerning the heatwave, if enough clouds pass over our area, forecast high temperatures would be slightly lower with more mild nights. Humidity could also creep up a bit. Clouds would be the "fly in the ointment."

To no surprise, drought is worsening across Oregon. Here's the latest weekly update of the Oregon Drought Monitor:

Historically, drought is a natural part of Oregon's environment but the two worst categories (D3, D4) are more rare. Here's a timeline of Oregon's historical drought conditions since 1895:

As of this writing, there's about a dozen fires burning across Oregon. Closest to us is the Jack Fire, east of Roseburg. It is now 57% contained and has burned almost 22,000 acres. The massive Bootleg Fire, northeast of Klamath Falls has burned over 400,000 acres and is 46% contained. "Contained" means how much percent of the fire has a barrier to keep it from spreading. It does not represent how much of the fire is put out. "Controlled" means the fire is completely extinguished. The Bootleg Fire is expected to burn until the more steady mid or late fall rains kick in.

Believe it or not, it's not all that uncommon to have back-to-back La Nina episodes. In meteorology, we call this a "La Nina Double Dip." Climate model data has been highly suggestive that another La Nina may form later this Fall and Winter. As more data comes in over the next month, we'll have a better idea of what our rainy season may look like. I will say, that, if a La Nina "Double Dip" does occur this fall/winter, it would likely be a "weak" event and probably dissipate around mid-winter. All "weak" episode La Nina's that have occurred since 1950 are split 50/50 in terms of our precipitation being below or above normal. If a La Nina were to form again, we would have equal chances of above normal, below normal, or normal precipitation if the event were to be "weak." Keep in mind that "neutral" conditions currently exist, meaning neither a La Nina or El Nino are present across the Equatorial Pacific.

Subscribe to receive updates when we post weather and preparedness updates to our blog. You can elect immediate, daily, or weekly emails. We anticipate a fairly low volume - 3 to 5 posts per week.
Copyright ©2021 grovewx.com